A hummingbird hovering to sip a flower or a hummingbird feeder is an incredible sight, and it’s only natural to want to know more about the tiny bodies and swift wings of these avian heroes. For example, did you know that ruby-throated hummingbirds can fly over the entire Gulf of Mexico in a single trip?

Read on to find out some interesting facts about these little wonders, from how fast their heart beats to how much they eat daily. 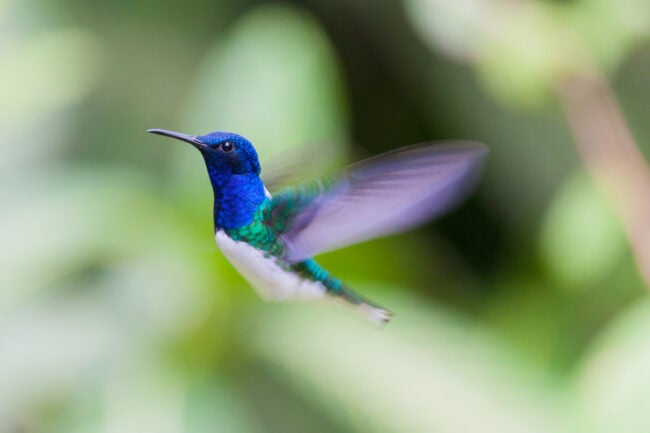 When a hummingbird is in mid-flight, its heart can beat up to 1,260 times per minute. It’s incredibly fast, especially compared to the average human heart rate, which ranges between 60 and 100 beats per minute. However, a hummingbird’s heart doesn’t always beat that fast. If they rest, their heart rate drops dramatically to only 50 to 250 beats per minute. This state of near-hibernation, known as torpor, keeps hummingbirds from expending too much energy and allows them to rest and prepare for the next day. 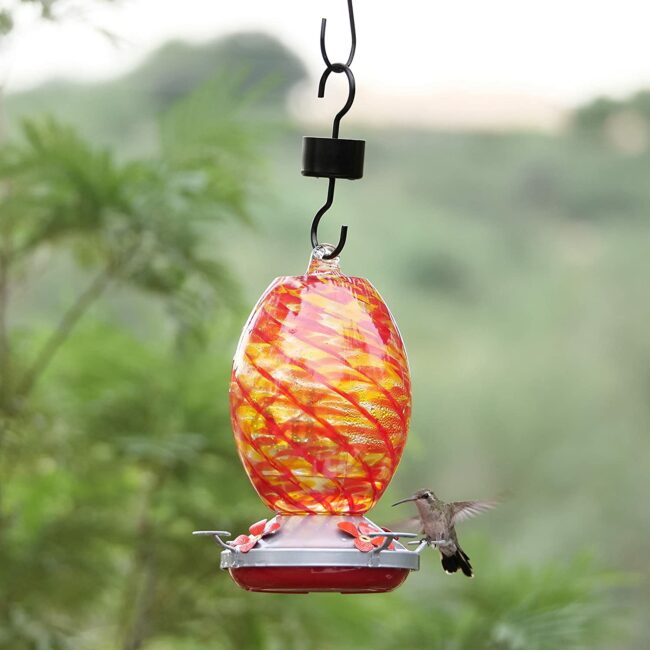 While many believe hummingbirds are attracted to the color red, this is not necessarily the case. They feed on the most sugar-rich flowers first, and because red, orange, and yellow flowers tend to have higher concentrations of sugar in their nectar, hummingbirds are usually found near flowers of those colors. This association between hummingbirds and brightly colored flowers is why so many hummingbird feeders are red with yellow or orange accents. 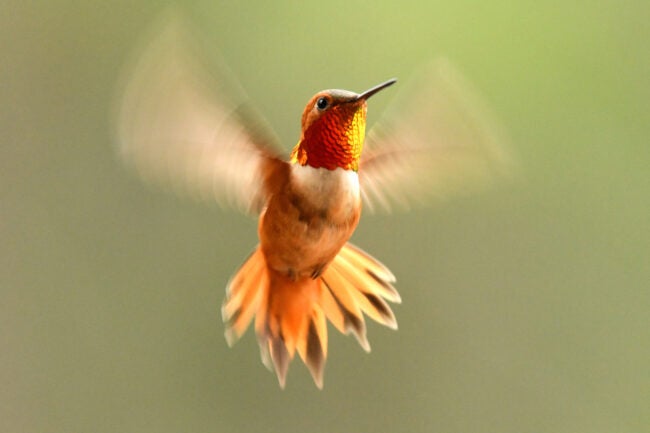 When a hummingbird hovers, its wings beat about 10 to 80 times per second. The exact speed varies from species to species, with smaller hummingbirds moving faster than larger species. In flight, a hummingbird can easily reach speeds of over 30 miles per hour. Some male hummingbirds can dramatically increase these flight speeds during their courtship dives, reaching closer to 60 miles per hour. 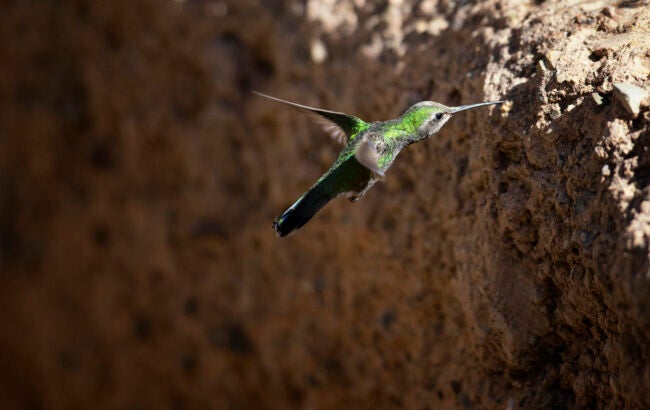 You probably already know that hummingbirds eat sugar water from feeders and nectar from flowers, but did you know that they also need a source of protein in their diet? When they’re not drinking sweet nectar or water, you can find hummingbirds nibbling on mosquitoes, gnats, and other small insects, even spiders! 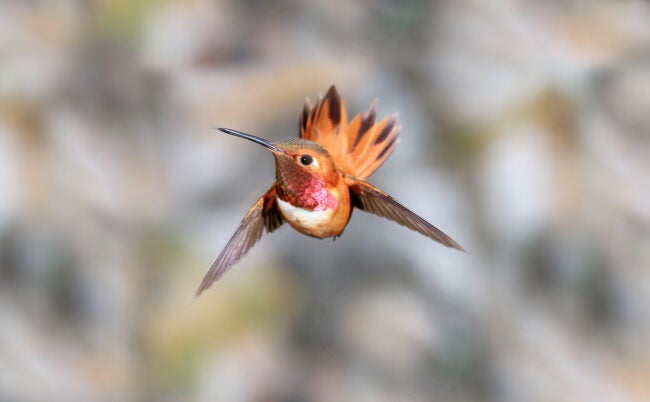 Hummingbirds regularly display impressive flight skills. Their wings quickly move in a figure eight as they fly, giving them greater control over their movements. This is how they hover in place to sip nectar with ease. Hummingbirds can even fly backwards, which no other species of bird can do. A hummingbird can even fly upside down for short periods if a situation calls for it. 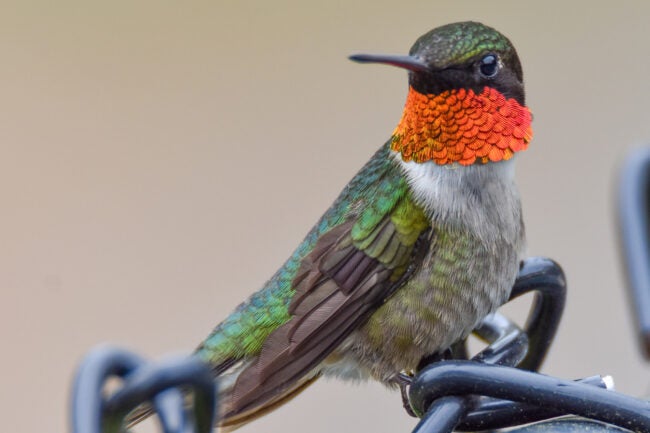 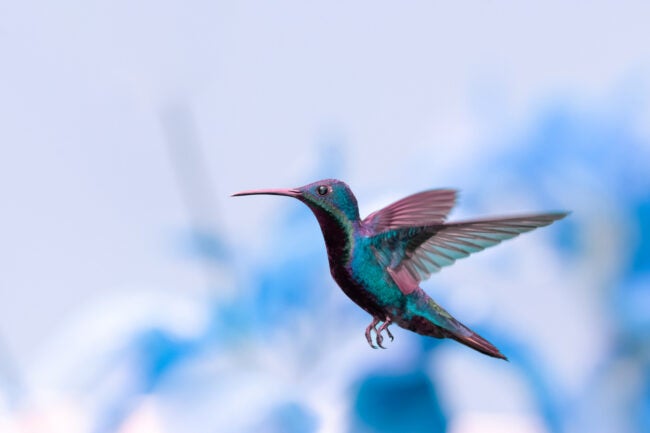 Hummingbirds prefer warmer temperatures, so while they can be found in most parts of North America during temperate seasons, most migrate to warmer climates in winter. These small birds can travel thousands of kilometers in search of warmer temperatures. The rufous hummingbird makes the longest journey, traveling more than 3,000 miles from Alaska or Canada to its winter retreat in Mexico. A testament to their endurance and instincts, ruby-throated hummingbirds travel 500 miles across the Gulf of Mexico without stopping to reach their destination. 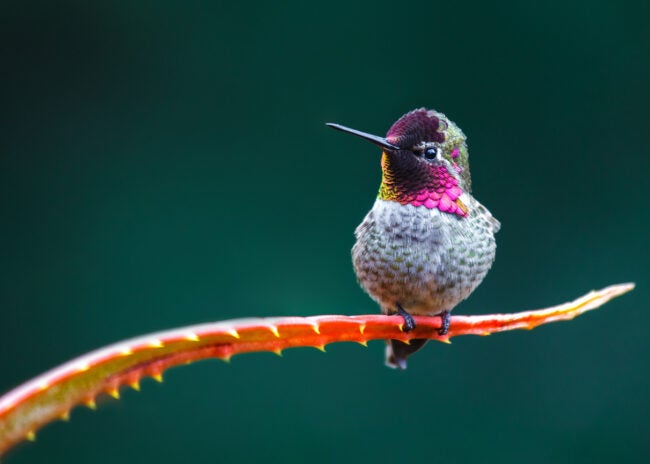 Birds aren’t often considered the smartest animals, but hummingbirds are an exception. A hummingbird’s brain makes up 4% of its body weight, more than any other species of bird. For comparison, the average human brain is only 2% of total body weight. Hummingbirds use their awesome memories to revisit areas of high food supply from years past. 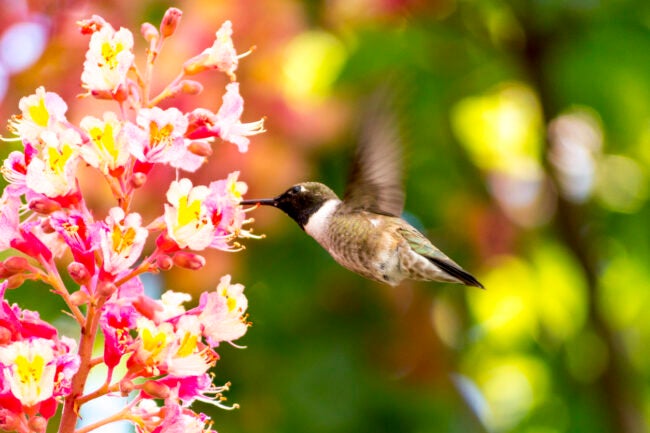 Hummingbirds are almost constantly flying and moving. This high activity level means they burn a lot of energy, which in turn needs to be replenished through plenty of food. Each day, a hummingbird can consume up to three times its weight in insects, nectar and other plant sources. A single hummingbird can drink up to 100 flowers per day. Depending on its size, it can consume up to 2 fluid ounces of nectar and/or sugar water per day. 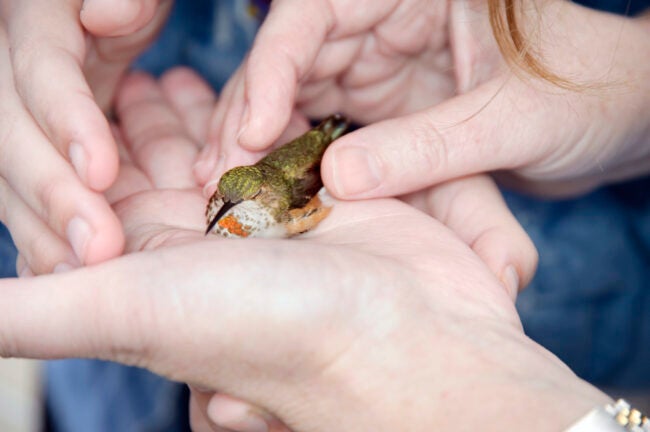 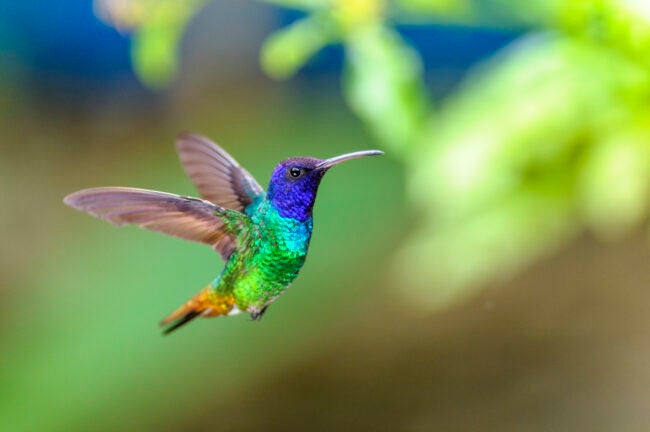 You may have noticed the vibrant, shimmering patch of color on a male hummingbird’s neck. Known as a gorget, this physical feature varies in color between species. Hummingbirds’ brilliant iridescence comes from air-bubble-filled structures in their feather cells, which reflect light in complicated ways to create the beautiful colors we see. 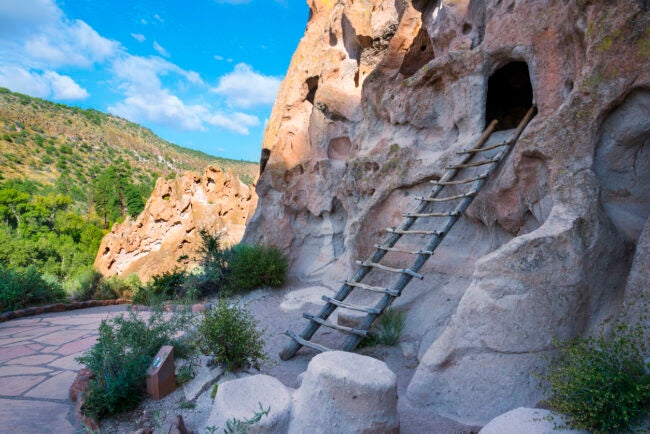 If you want to see these fascinating creatures up close, there are a number of hummingbird gardens and sanctuaries across the United States. Notable among the most notable are the Tohono Chul Botanical Garden in Tucson, Arizona, with its collection of desert honeysuckle, salvia, and desert willow, and the Bandelier National Monument in Los Alamos, New Mexico, where the black-chinned, broad-tailed, calliope, and rufous hummingbirds can be seen at certain times of the year.