Jean Smart, 1974, joined the Hollywood Walk of Fame for her contributions to television. His show “Hacks” began its second season on HBO on May 12.

The Hollywood Walk of Fame welcomed another Husky to its list of more than 2,700 TV, movie, radio and music stars. Jean Smart, 1974, had her name engraved on one of Hollywood Boulevard’s newest stars, joining seven other UW legends. Here’s where you can find them. 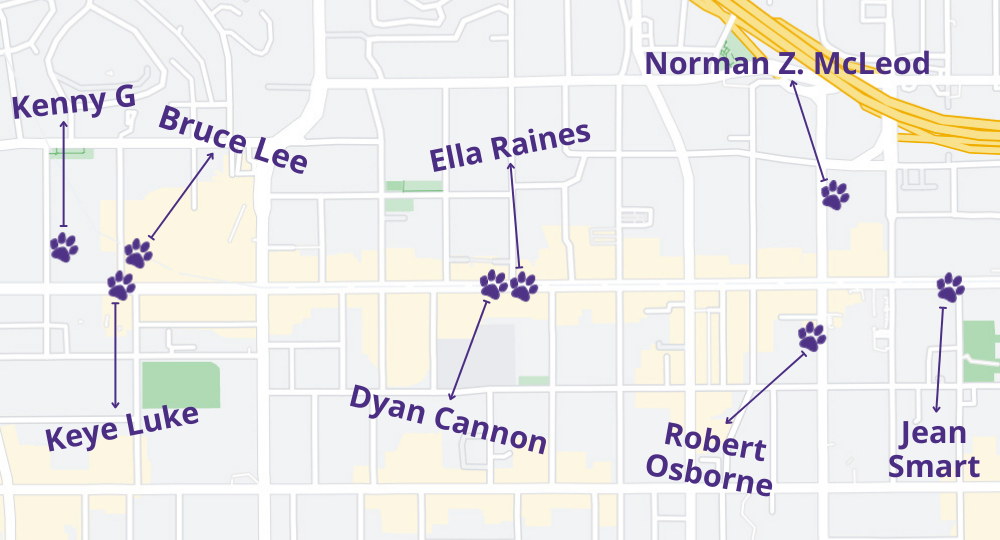 Begin your tour at 7021 Hollywood Blvd., where you will find Kenny G.is the star. Kenneth Gorelick, 1978, earned a BA in Business Administration/Accounting from UW before becoming a smooth jazz musician and one of the best-selling artists of all time.

Proceed east on Hollywood Boulevard to Key Luke‘s* star. Luke, who paid for his UW tuition by designing movie posters for Seattle theaters, also designed sheet music covers for a local music store. He studied architecture but gave up the job after his father’s death. Luke became a newspaper illustrator in Los Angeles, where he made his big break as an artist and actor. He died in 1991.

Opposite Keye Luke you will find another legendary actor and former Husky. Bruce Lee*, an internationally acclaimed martial arts superstar, took acting and philosophy classes at UW, which he took for three years without graduating. While in Seattle, he worked at Ruby Chow’s in the International District and gave Jun Fan Gung Fu lessons to his fellow students. His star is located at 6933 Hollywood Boulevard.

Another block to the east you will find the star of Dyan Canon*, three-time Oscar-nominated actress and ex-wife of Cary Grant. Next to Cannon at 6600 Hollywood Boulevard is Ella Raines‘ star. Raines, 42, earned her bachelor’s degree in drama at UW. She has two stars on the Walk of Fame – this one for television, and another for movies at 7021 Hollywood Boulevard (next to Kenny G).

Turn right on Vine Street and you will see Robert Osborneis the star. Osborne, ’54, was a legendary “Hollywood Reporter” columnist from Colfax, Washington. He earned his communications and journalism degree from the UW and hosted cable channel Turner Classic Movies for more than 20 years. He died in 2017.

Head north and you’ll find the star of Norman Z. McLeod at 1724 Vine Street. McLeod studied economics and business at UW, then spent two years as a fighter pilot in France during World War I. He directed dozens of shorts, movies and TV episodes (including an episode of “The Twilight Zone”) before his death in 1964.

We end our visit at 6150 Hollywood Boulevard with a shining new star: John Smart, ’74, joined the Hollywood Walk of Fame in April for his contributions to television. Smart majored in drama at UW’s College of Arts and Sciences (CAS) and was twice awarded the CAS Timeless Award. She was listed in our Wonderful 100 Alumni of the 20th Century.

* Keye Luke, Bruce Lee and Dyan Cannon attended UW but did not graduate. David Foster, who enrolled in 1961, never attended but is considered an honorary alumnus; his star is located at 1750 Vine Street. Broadway and film star Ann Sothern (whose star is at 1612 Vine Street) also reportedly attended UW for a year, but Sothern is not listed in our student database.

And in case you were wondering, Anna Faris, Joel McHale, Kyle McLachlan and Rainn Wilson currently don’t have stars on the Walk of Fame. Anyone can nominate a celebrity for a star, but you’ll need a letter of agreement from the nominee, plus the $50,000 sponsorship fee, to seal the deal.