The Hong Kong races are in Sha Tin on Sunday for a 10-race schedule.

Here’s our preview of the action.

The opener is one of two runs of the day on the all-weather track and GENERAL TRUMP (8) can go better than an early effort that saw him finish second on the box behind Touch Faith. The six-year-old settled down that day before running and would have to strip naked for it. RUBY STARS (11) is a lightweight contender who is not without luck. He hasn’t gone too far in his last two races on the AWT and is only 51.5kg. THE MULTIPLIER (5) is a former galloper from Adelaide who has done little since arriving in Hong Kong but did well on his first surface outing when 5th here behind Lady First and drew well with Zac Purton conduct. HANDSOME REBEL (4) resumes from a relaxation and should be around. 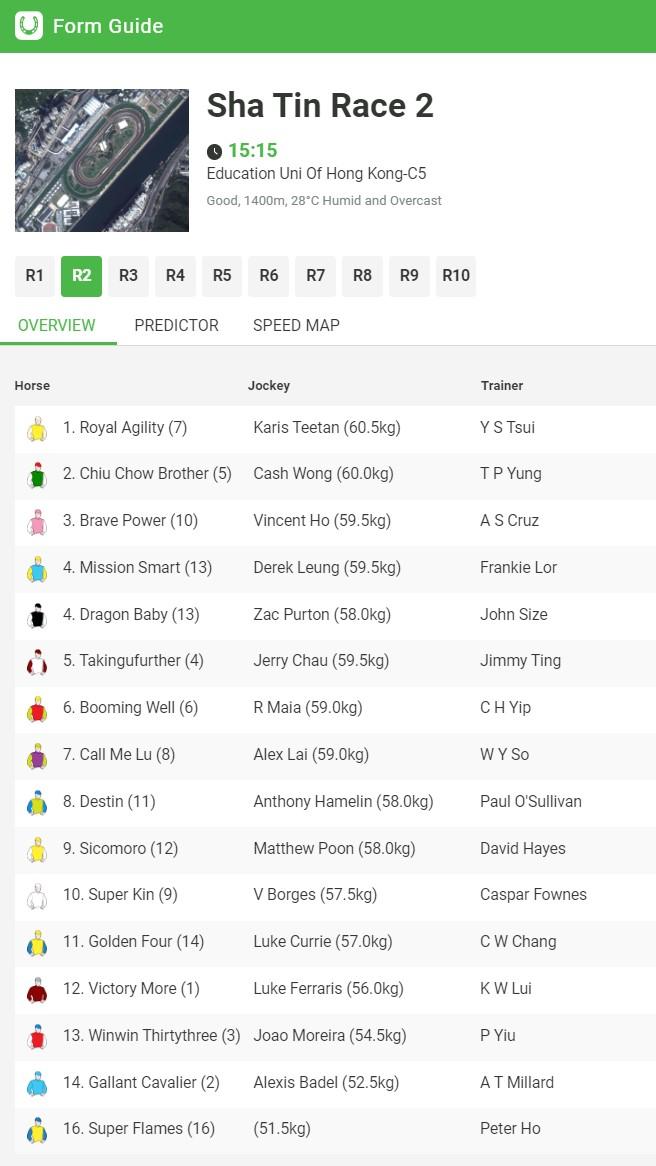 ROYAL AGILITY (1) can turn things around on MISSION SMART (4) after getting off that horse at the track and traveling on May 15. On this occasion, the septuagenarian was posted wide before narrowly missing. It will settle in handy on what might be a moderate tempo. WINWIN THIRTY THREE (13) is generating interest. He hasn’t had much luck in his last two starts and ends up putting up a barrier, while Joao Moreira jump on board. The Brazilian jockey holds a five-win lead over Zac Purton in the Jockey Premiership with just over a month to go in the season. BRAVE POWER (3) is a late start winner who loves the track and the journey. 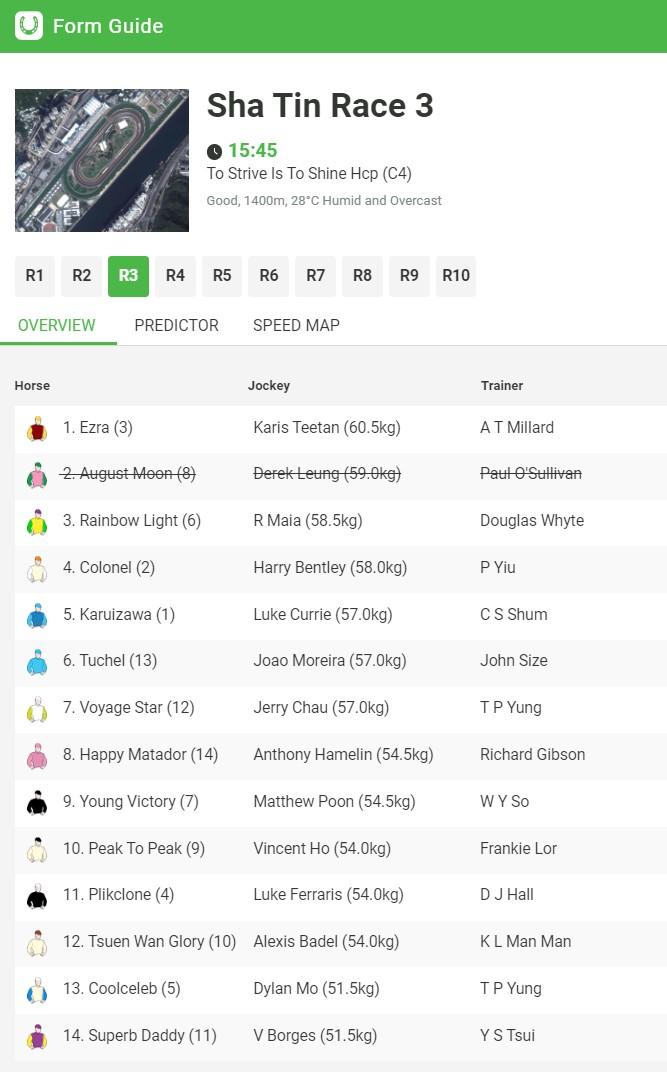 AUGUST MOON (2) is shaping up to be a major player in Race 3 of the day. The Paul O’Sullivan-trained galloper won ahead of California Vanes here two starts and didn’t have the clearest runs when filling the exacta behind Ace One on the track and trip on May 15. It will settle within easy reach and should be in it for a long time. TUCHEL (6) shows promise. The Jeans size-the trained galloper shoots wide but caught the eye when he ran from behind when he was 5th behind Above All on May 25. It was only his second career start and we can expect improvement. RAINBOW LIGHT (3) has come close lately and finished 3rd in a solid form run behind Erimo on May 7th. It should be roughly. PEAK TO PEAK (10) is one of the first four candidates. 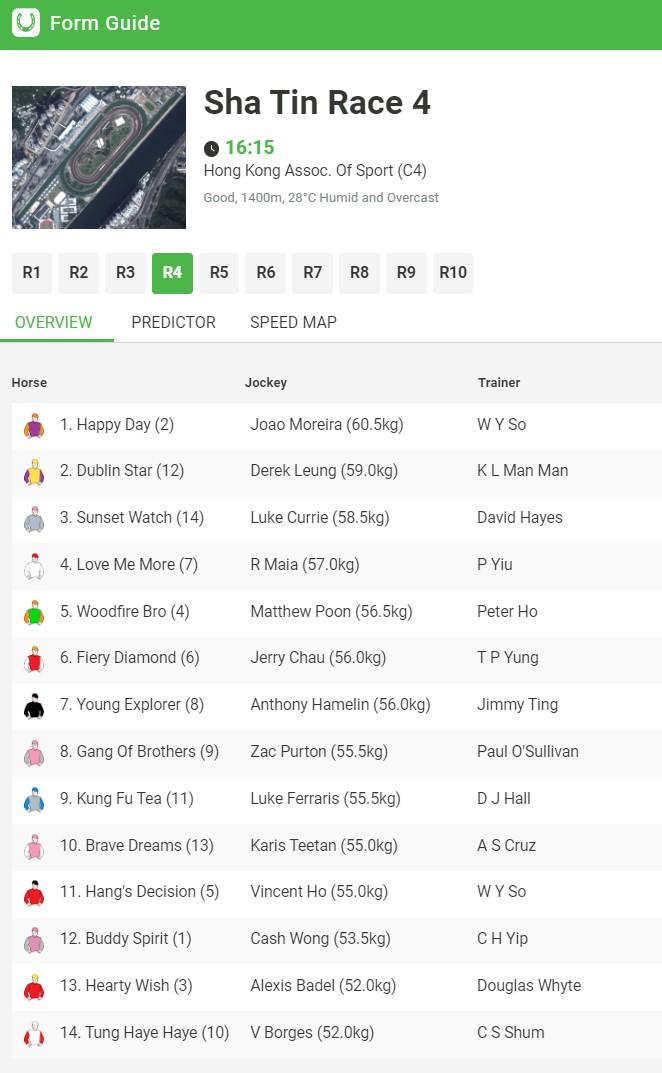 It comes in the form of an open betting race and GANG OF BROTHERS (8) is one of a host of opportunities. The four-year-old has placed in three of six career starts and was 4th behind Oversubscribed at Happy Valley on May 18. He tackles Sha Tin for the first time but seems to want the 1400m and Purton rides. FIERY DIAMOND (6) comes in with similar credentials and made a few mistakes last time out in the 1200m before running well for 5th place, beaten by a single length by Wisdom Patch. BRAVE DREAMS (10) draws wide and will come back but get in with a solid tempo. WOODFIRE BRO (5) is to be thrown away at a bit high price. 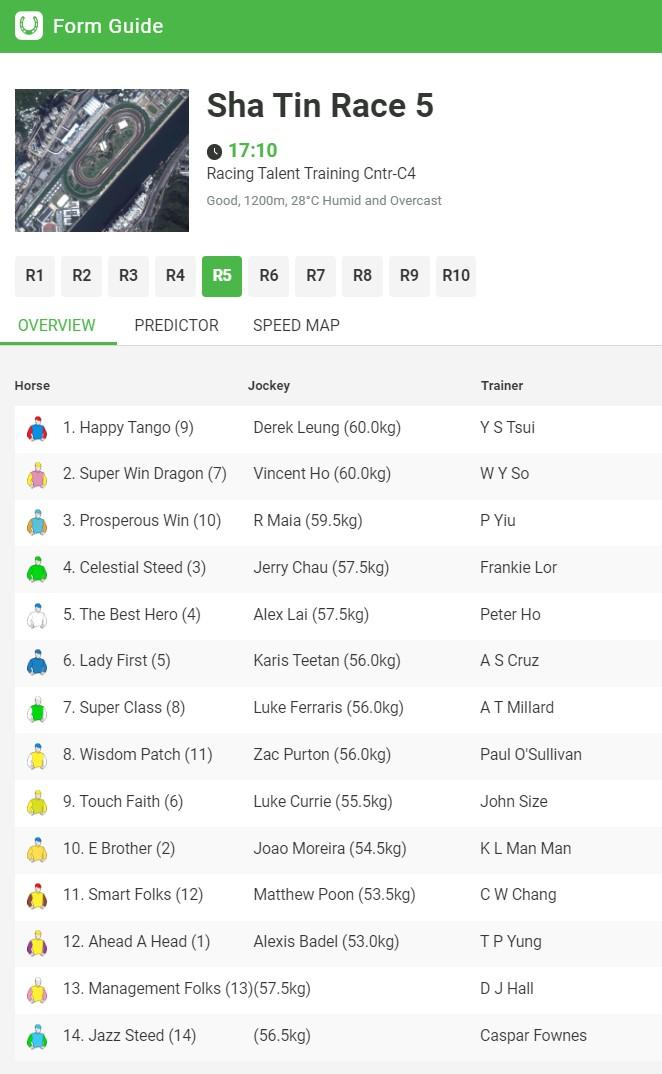 PROSPEROUS WIN (3) can turn the tide on WISDOM PATCH (8) after descending on that horse on May 15. It was the first career start for the son of Magic Albert, who was wide in the race before suffering a checkered run on the straight en route to filling the exactea. E BROTHER (10) is coming off a separate run and was also posted when he was 3rd behind LADY FIRST (6) on May 4th. The galloper trained by Manfred Man has yet to win in 10 starts but has placed in two of his last three and gets the Moreira robbery. He can box from the barrier. 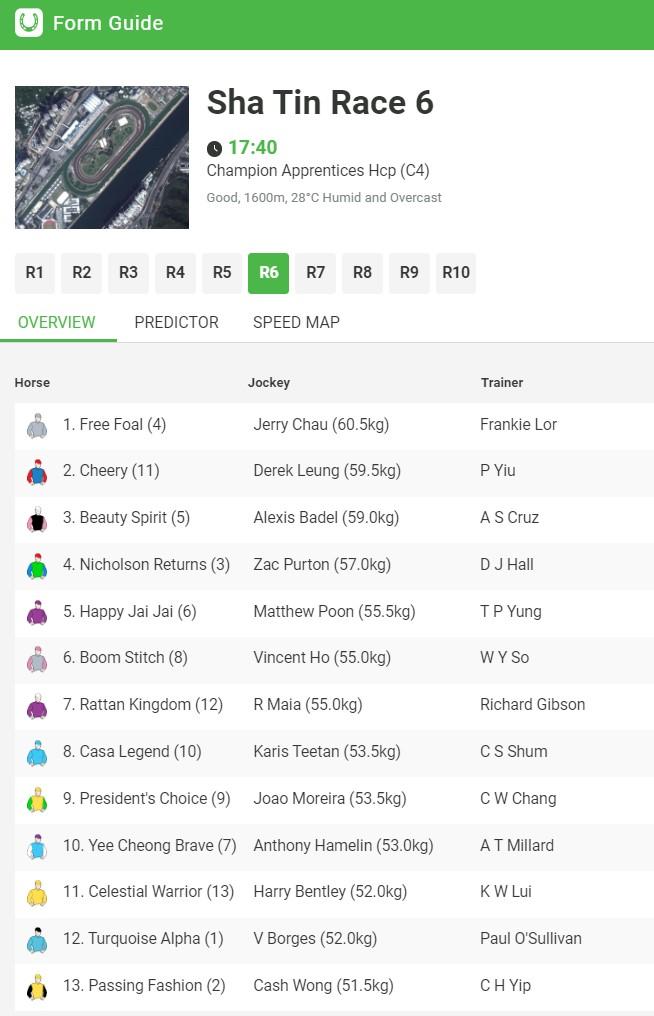 We have to stick to NICHOLSON RETURNS (4) in race 6 of the day. The David Hall-trained galloper was a little slow to get going early in his career but prevailed by nearly five lengths over BEAUTY SPIRIT (3) on the track and trip on May 1, leading and winning in good time in the process. He draws well with Purton to go up. CHEERY (2) could be the danger. It had a similar margin on beauty spirit in a separate run on May 15 with Dragon Pride separating those two. The galloper trained by Ricky Yiu only has to overcome the wide barrier. PRESIDENT’S CHOICE (9) came to a lame stop at his last but just missed before that and is in the mix. 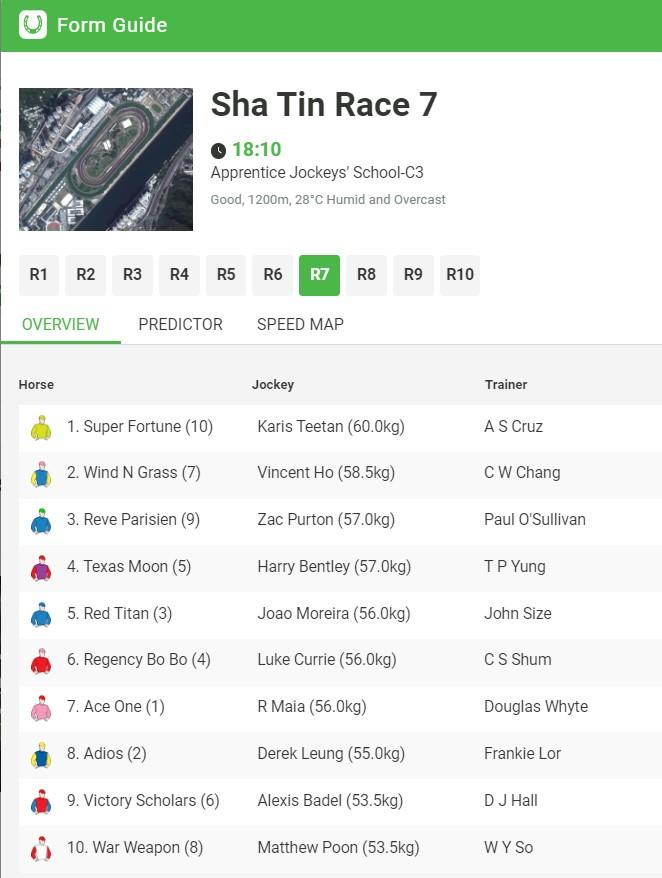 Nice race with promising guys in action. Former NSW galloper ADIOS (8) was sent off after winning at Gosford late last year and tried hard before finishing second in her Hong Kong debut in the 1,000m at Happy Valley on May 25. He walked away and was dispatched that night before closing well. Climb to 1200m and barrier 2 looks like big ticks. SUPER FORTUNE (1) has won two of its last three games and could look to lead. He will give them something to hunt. VICTORY SCHOLAR (9) won’t be far in the race and has completed the exacta in his last two. He was held back to the newest of these and with a clearer tune he may be a factor. PARISIAN DREAM (3) is another one that is in the game. 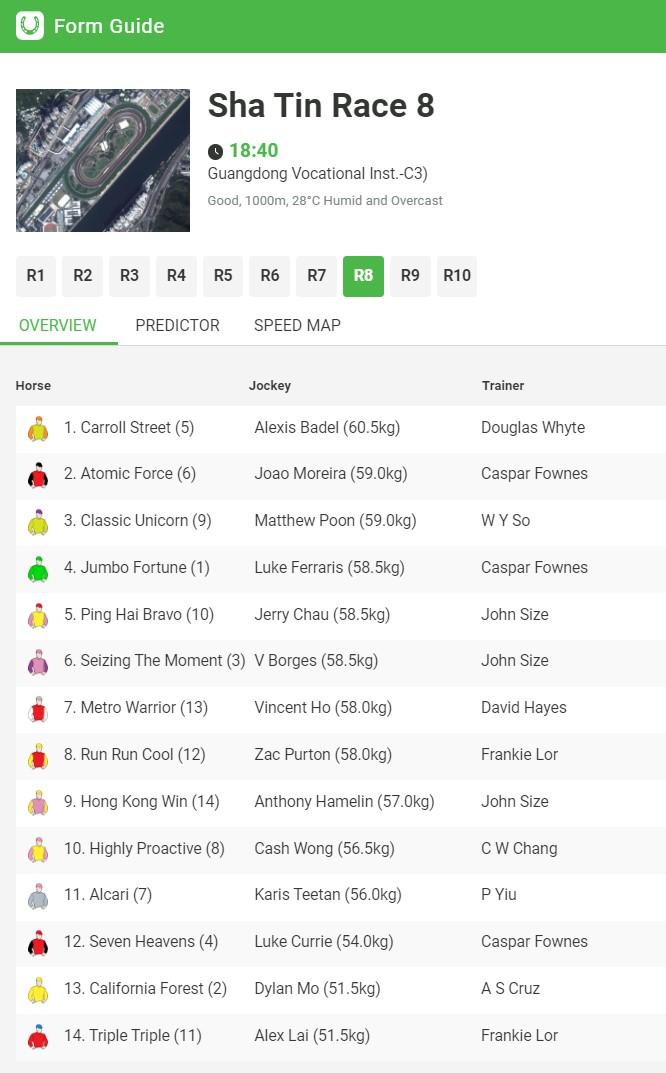 We head to the 1000m straight track for race 8 and RUN RUN COOL (8) can bounce back after running 4th on the track and tripping on May 7th. Frankie Lo-the trained galloper got caught up in a bit of a bumpy duel that day and won by big margins in his two previous starts. Purton stays on board and the pair draw the grandstand side. METRO WARRIOR (7) draws this part of the track and is still solid in the 1000m here. He finished 3rd in the same race as Run Run Cool last time. ATOMIC FORCE (2) had some issues when he was 10th at the Class 2 level behind Stoltz in his last few races and should find it easier. SEVEN HEAVENS (12) improved last time and is worth including in the multiples. 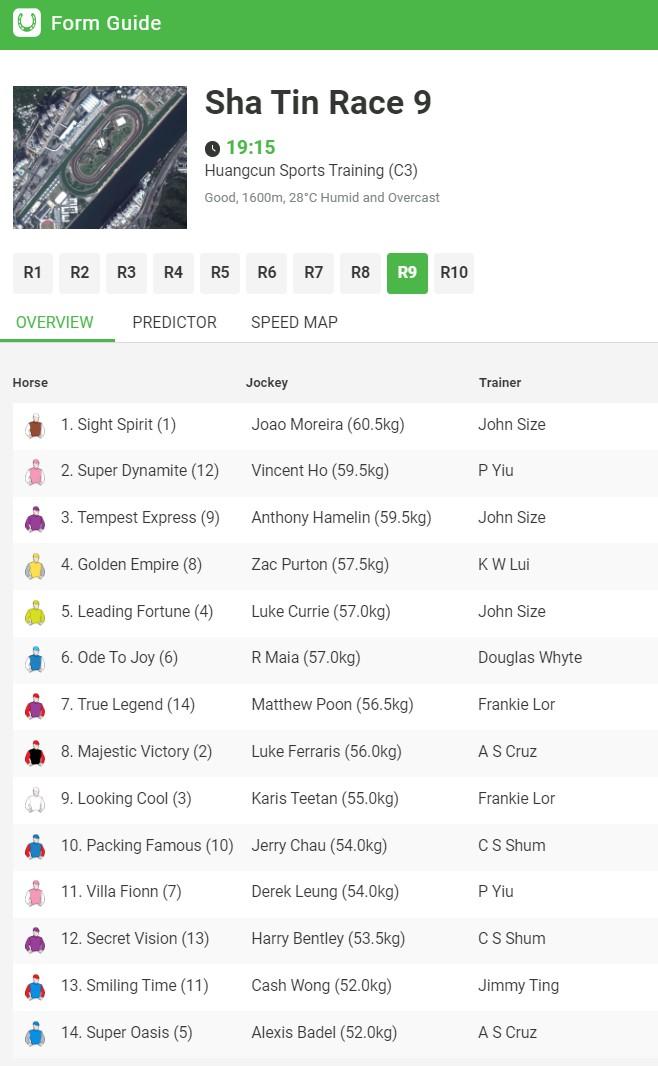 Interesting to see where Moreira and Purton stand at this stage of the encounter and both have solid chances here. Go with the latter to Purton for this race. The Australian hoop rides GOLDEN EMPIRE (4), who won two on the trot before moving into his final two. Look for him to settle in the midfield and be very late. Moreira rides SIGHT SPIRIT (1), who was down at the end of his first prep but won three on the trot earlier and drew to save some ground from barrier 1. He picked up and settled with three trials. LOOKING COOL (9) overcame the odds to score here in front of Copartner Era on May 7, these two leaving a gap on the others. He checks the boxes of barrier 3 with Karis Tetan conduct. SECRET VISION (12) draws awkwardly but has the upper hand and can continue to crack the top four. 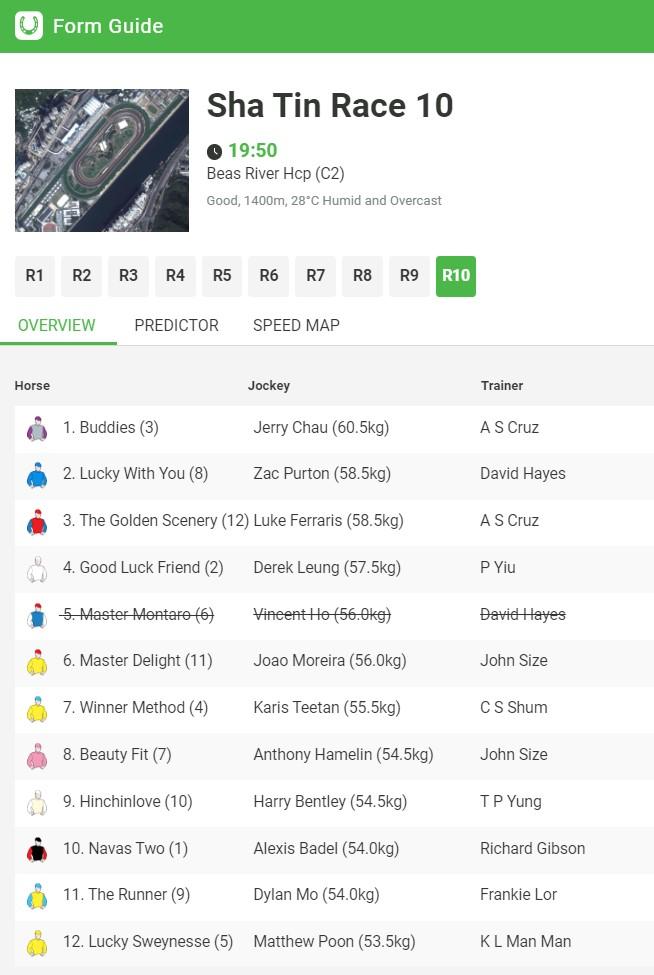 We conclude with a class 2 over 1400m and LUCKY SWEYNESSE (12) can end the day as the winner. The three-year-old made his first three starts before running a bit briskly after a seven-week break on May 11 when he was 3rd behind Astrologer at Happy Valley. He goes up in rank but loses 8 kg of weight and will be ridden by Matthew Poon from Barrier 5. LUCKY WITH YOU (2) will be looking to slot in and was a runner-up in the 1200m at Happy Valley behind Keep You Warm on May 18. He returns to Sha Tin and scored in a run of solid form over the 1200m before that past Cordyceps Six. THE GOLDEN SCENERY (3) was a little unlucky when he finished second behind GOOD LUCK FRIEND (4) and entered it with an equal or better tempo. The winner of this increases in weight but remains in contention from the low draw.